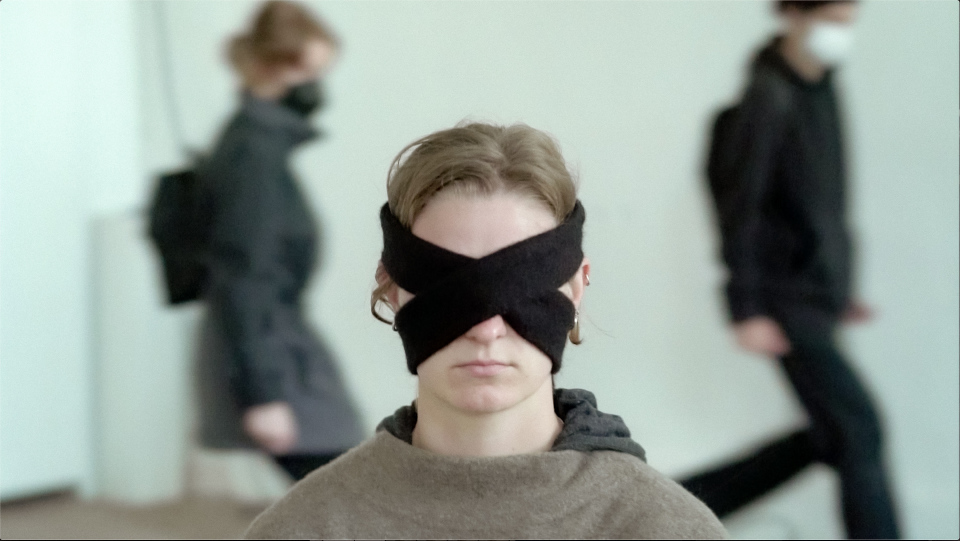 “House of Labrys” is an immersive soundscape made by artist duo IevaKrish in collaboration with Latvian composer Jēkabs Nīmanis. It is a dance of five voices that isn’t offered to be experienced visually. Visitors will be asked to blindfold their eyes upon entrance and then escorted to an individual seat placed in a grid. Each and all will be surrounded by a composition of spatial sound carried and played by geometrically moving dancers. “House of Labrys” is a humanly attempt to create an imagined, architectonic constructions through movement and sound. In this attempt a notion of human imperfection and fragility is revealed.

For “House of Labrys” IevaKrish and Nīmanis in collaboration with software and hardware designer Pāvils Jurjāns have invented a new mobile instrument: a kinetic contra-point sampler. Five of those are carried in backpacks and simultaneously controlled by each dancer. 38 prerecorded sound samples are controlled, moved and composed into music by dancing performers. In result music written by Nīmanis follows live the rules and decisions of choreographic material invisibly manifested in space. Nīmanis has provided tools that enables IevaKrish to choreograph sound. In turn choreography itself next to Nīmanis will become the second composer of “House of Labrys”. The context of “House of Labrys” is designed for (but not limited to) visitors with visual disabilities.

Space
A silent indoor or outdoor (not tested yet) space of at least 14x14 meters in size is required. That said we are currently working on 12x12 meters adaptation.

Sound
We travel with our own sound equipment of
a) portable speakers;
b) stationary speakers, sound cables, sound card, computer;

a) Portable sound system (Kinetic counter-point samplers) are carried and controlled by performers
b) Stationary speakers are placed around the perimeter of stool grid and require electricity and are controlled from control table by
5th performer. If there is no electricity, we are open to discuss a version without stationary speakers.
A backstage with electricity is required to charge portable sound systems and obsolete smartphones between rehearsals and shows.

Light
No additional light is required.

Stools
In Europe we travel with our own set of 50 stools. During one show we can accommodate 45 audience members. We are alway ready to play the performance multiple times per day.

Audience
The context of House of Labrys is designed for (but not limited to) visitors with visual disabilities and for each new staging of the show an accessibility strategy should be discussed and enacted. We have technology to produce audio recordings of press releases and together we should make sure that audiences with visual impairment could find out about the performance and get to the venue.