Polemic of Two Metrics is an installation of choreographed sound and shadows casted by a geometrical sculpture. It is accompanied by an occasional movement performance. The installation centres on a large suspended object derived from ‘sodai’ (in Lithuanian) or ‘puzuris' (in Latvian): a traditional straw sculpture that consists of a double pyramid rotating around its axis. Used to mark moments of transition in life, such as solstices, births or weddings.However for IevaKrish this artefact is interesting for being commonly understood as a miniature depiction of the universe. In this regard, the ‘puzuris’ or ‘sodai' and it's shadows should not be read as a merely sculptural object, but as a shaping of the void into geometrical order, as a projection of an ideal space, as a projection of past shaping the future.

IevaKrish’s brass version of the ‘sodai’ differs from the traditional straw made ‘puzuris’ in that it has been split in half, creating two autonomous pyramids that rotate separately, coexist and influence one another in way that fails to be polemic.

It resembles the world that has been split into two, the world that is made out of metal and is hanging on a thin, invisible thread. Yet it structures and occupies an ideal (empty) space and projects a complex repetitions of shadow. The surrounding of the sculpture is filled with choreographed sound coming from circle of speakers.

Occasionally two dancers appear in the space to attune the expression of their body to the projected unknown, chasing the shadow and the flow of the sound. 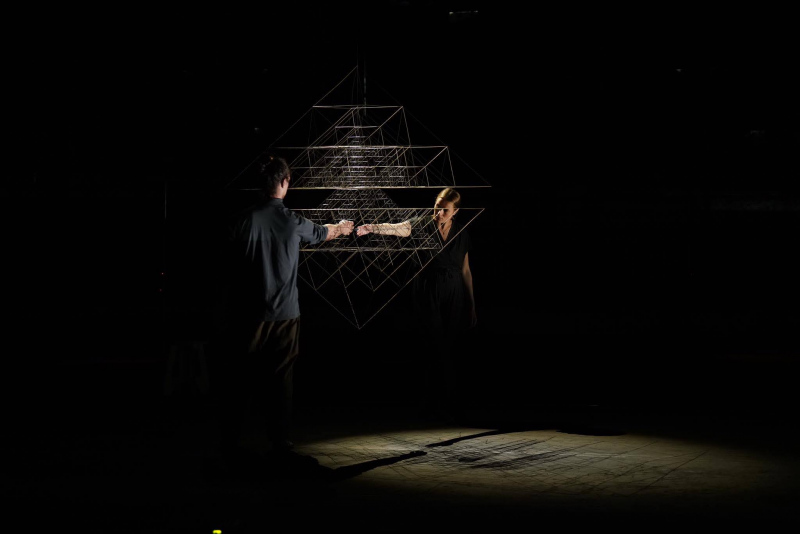 Labrys is a humanly attempt to create imagined, architectonic constructions through movement and sound. The performance space is not used to create movement — the movement is modelling a space where two minds and two bodies have to constantly work together to perform mathematically complicated spatial combinations. In this attempt to construct an imagined labyrinth a notion of human imperfection and fragility is revealed. 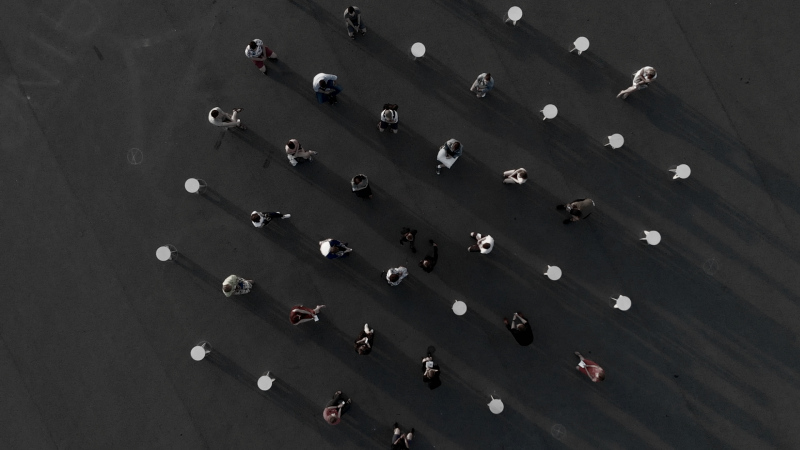 “Satikt” is an immersive choreography, chants and moving sound organized in the form of a spectacle, balancing between similar differences and different similarities.

It is a research on Lithuanian sutartines multi-part (polyphonic) singing, where concurrently performed chants are characterized by a sound vertical filled with large and small seconds as well as rich usage of complementary rhythms. The word “sutartine” comes from Lithuanian word “sutarti”: to get along with, to come to terms, to agree, and translates in Latvian as “satikt”. Sutartines used to be performed only by women, each singing seemingly their own song with their own concurrently sounding text, but with rhythm and melodies that compliment the other creating consistently dissonant harmony, which could be described as similar to a sharp dissonant soundscape created by bird songs.
During the creative process of “Satikt”, the practice of sutatines chanting was considered as an indirect praxis of dialogue, where the slightly unlike is accented as complimentary, where the necessity for the nearby different is cherished. Based on this presumption artist duo IevaKrish has begun to develop methods of creating polyphonic dance material. In which two dancers, each in their own frame of complementary rythme, perform one shared dance. In other words, how the slightly dissimilar can be enriching for the whole.

The dances of “Satikt” performed side by side, same as synchronal chants of sutartines, incline to differ from each other only by a tone. “Satikt” possibly is a try to meet and to get along through the dissimilar and dissonant.

The outside eye - Sandija Santa

The performance was created during Valmiera Summer theater festival 2020 and was later developed with the support of State Culture Capital Foundation, Choreographer's association’s programme  “Jumts” and dance exchange programme  “HOROS”. 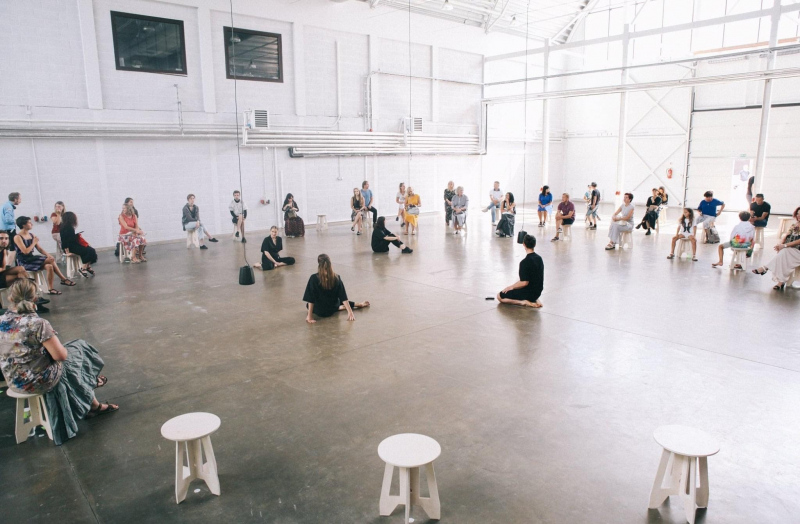 A Void Within Reach is an exploration of symbolism from stories of the Gilgamesh Epos and Judeo-Christian creation myths. The story of The Great Flood represented in both sources and the notion of “reset” (passing between two states: destruction and reconstruction) played an important role in the creative process. “A Void Within Reach” is a collage of dreamlike archetypical notions presented in a format of an immersive performance taking place all around. The focus of the audience is always organized between at least a couple of points of action, inviting the audience to choose where to place their attention.
Circular and abstract dramaturgy takes place giving a notion that history repeats what is yet to come.

Although not part of the initial artistic research, “A Void Within Reach” has become a metaphor and “a song” for the potentiality of ecological disaster through disregarded industrial usage of nature. A looming feeling of approaching destruction of the present time, the archetypical knowledge and the tempting feeling of the great potentiality of following reconstruction and the captivating violence, beauty and terribleness of the whole process has emerged as important impressions of the performance.
A Void Within Reach is an eternal soundlike movement that forms a transiting space. 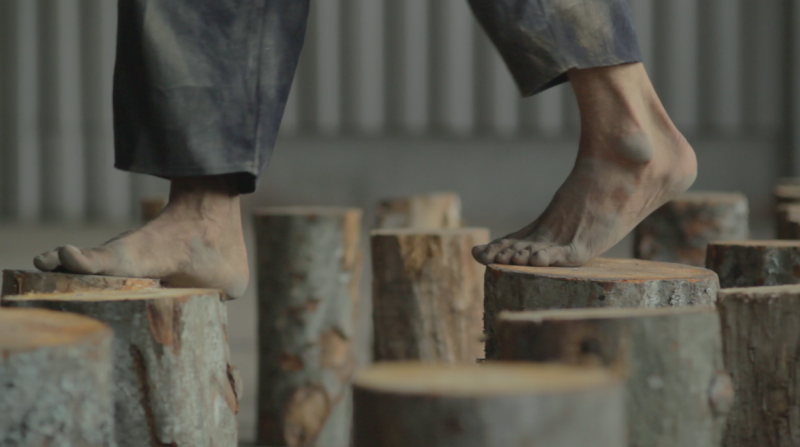 GOTCA is not a traditional workshop nor a traditional performance, but a very traditional hybrid balancing in its communication between both. It has an aim to create a two hours long shared performative space after which each participant would actually feel more inspiring to others and in turn empowered. GOTCA tries to understand how come not everything goes (even at occasions when anything goes) in a form of seriously relaxed absurd. GOTCA always had both elements present: it starts more like a performance, then turns into a workshop of massaging and being massaged, collective breathing and watching how artists, while doing the previously established breathing score, makes a traditional baltic cold beetroot soup and servers it to everybody present. The event has no particular ending, it just dissipates while everyone is eating and chatting with each other. Artists believe that feeling of belonging in certain community could put one in a so called flow state where everybody individually and separately can engage into a shared temporary reality. 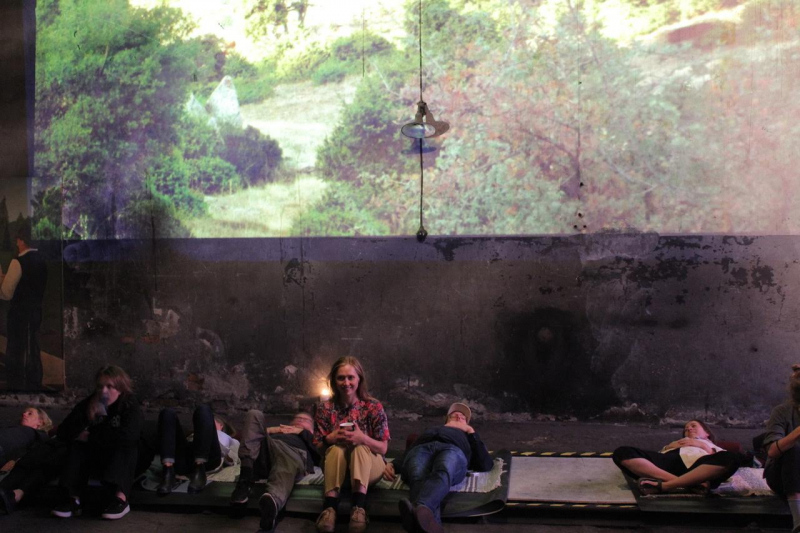 Infade (“Uzdzist”) is a composition of natural physical movements and reactions in an unnatural environment where there is no determined and collective beginning or end. What for one might be midway, for another simultaneously is a finale. The vast number of individual histories exposes multiple views of self in the world, the observer in the world and the observed within numerous worlds. Thus the ambition of Infade was to create an exclusive experience for an individual that simultaneously and unknowingly would become part of someone else’s reality and an observation of a stranger's nature is enabled. The artists aimed for the participant and the space to be in constant dialogue. They concentrate on sensorial type of communication that potentially could evoke and challenge to rely on instinctive part of ones being, changing the way how the participants experience the environment. The scenography (which is also created by the artist duo) is manipulated by light, sound and video to evoke a personal dialogue with one audience member at a time. 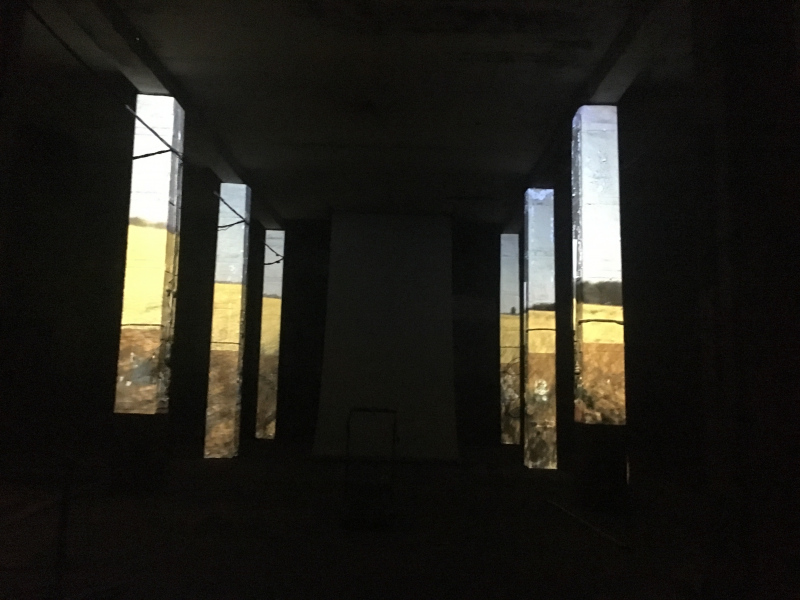 This is a diary or a reflection produced when asked to share the view on current reality in April and May of 2020. The diary consists in a form of graphic video of choreographed quotes, texts, music and drawings present in the shared life during the very first self isolation. 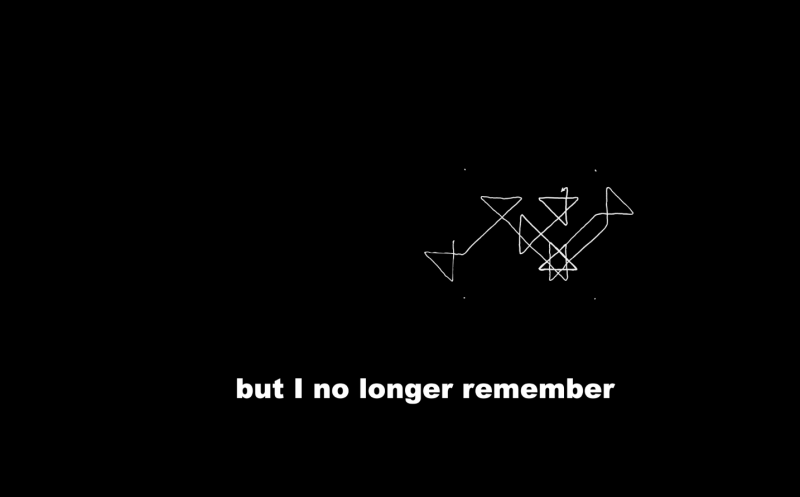 “House of Labrys” is an immersive soundscape made by artist duo IevaKrish in collaboration with Latvian composer Jēkabs Nīmanis. It is a dance of four voices that isn’t offered to be experienced visually. Visitors will be asked to blindfold their eyes upon entrance and then escorted to an individual seat placed in a grid. Each and all will be surrounded by a composition of spatial sound carried and played by geometrically moving dancers. “House of Labrys” is a humanly attempt to create an imagined, architectonic constructions through movement and sound. In this attempt a notion of human imperfection and fragility is revealed.

For “House of Labrys” IevaKrish and Nīmanis in collaboration with software and hardware designer Pāvils Jurjāns have invented a new mobile instrument: a kinetic contra-point sampler. Four of those are carried in backpacks and simultaneously controlled by each dancer. 38 prerecorded sound samples are controlled, moved and composed into music by dancing performers. In result music written by Nīmanis follows live the rules and decisions of choreographic material invisibly manifested in space. Nīmanis has provided tools that enables IevaKrish to choreograph sound. In turn choreography itself next to Nīmanis will become the second composer of “House of Labrys”. The context of “House of Labrys” is designed for (but not limited to) visitors with visual disabilities. 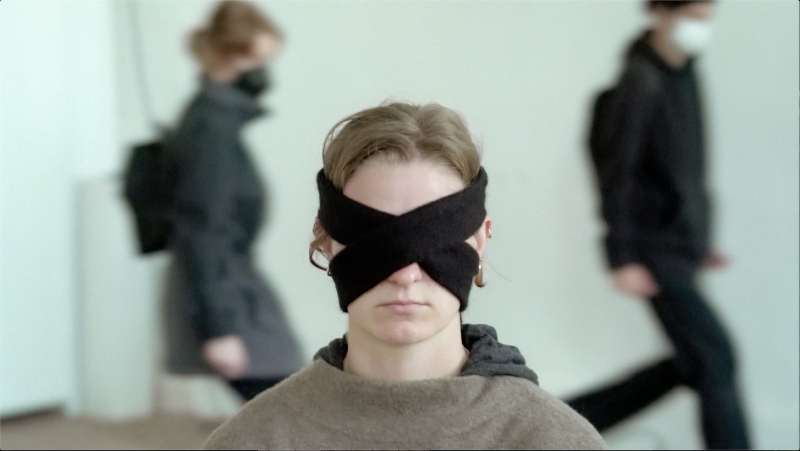 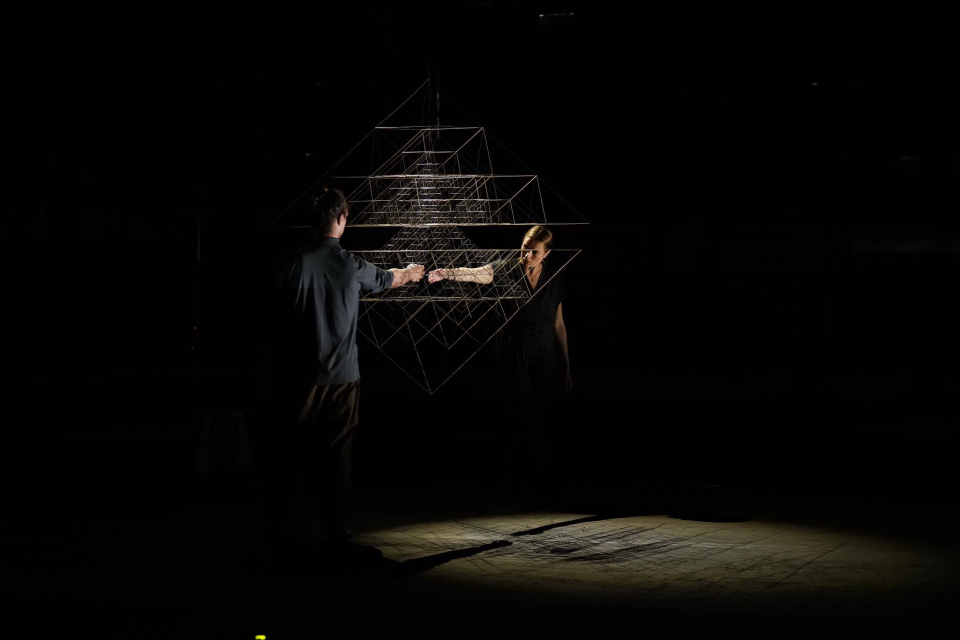 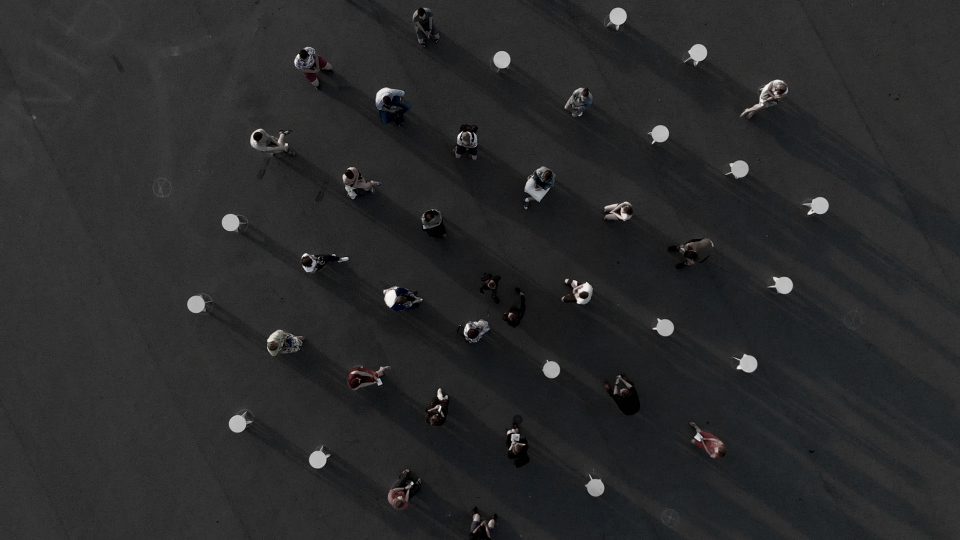 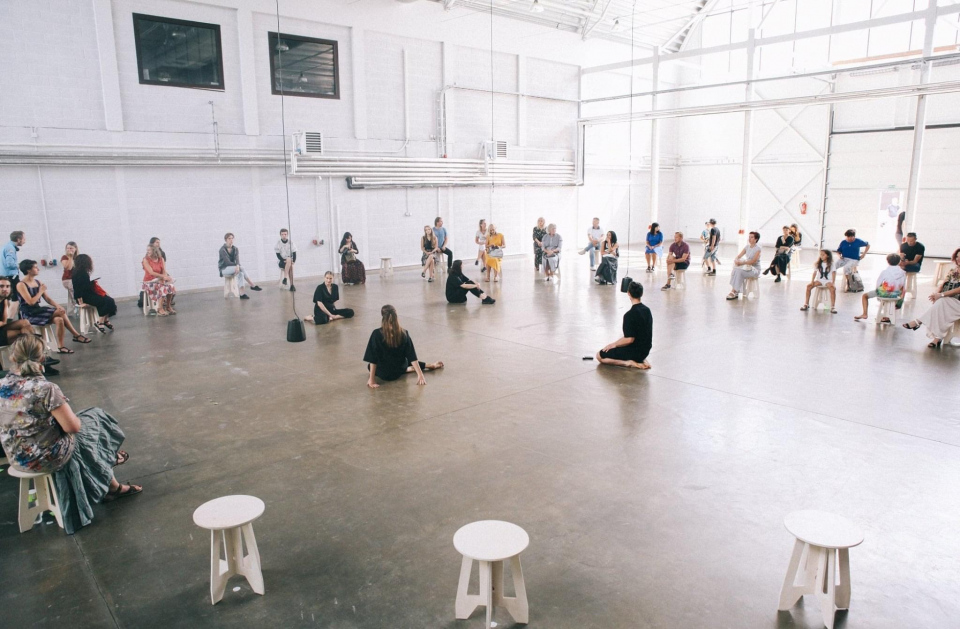 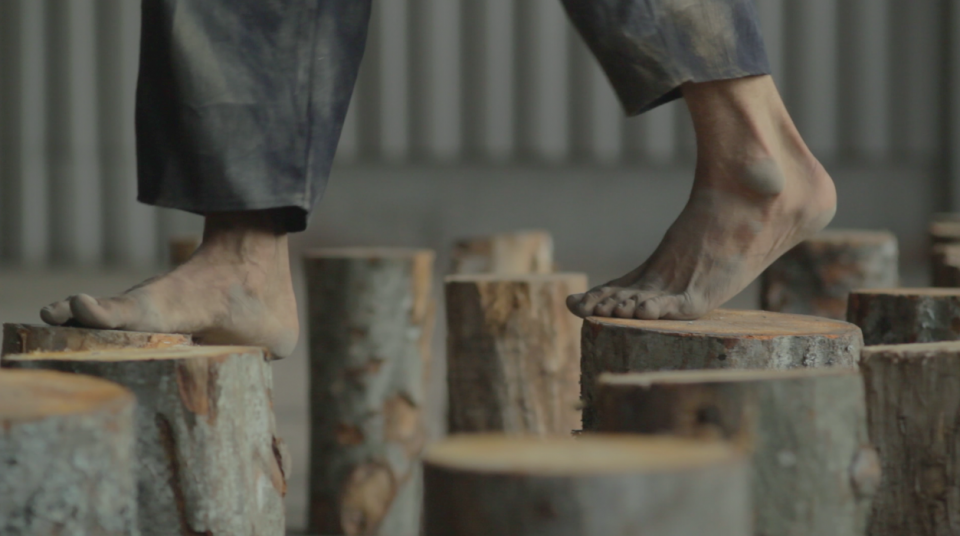 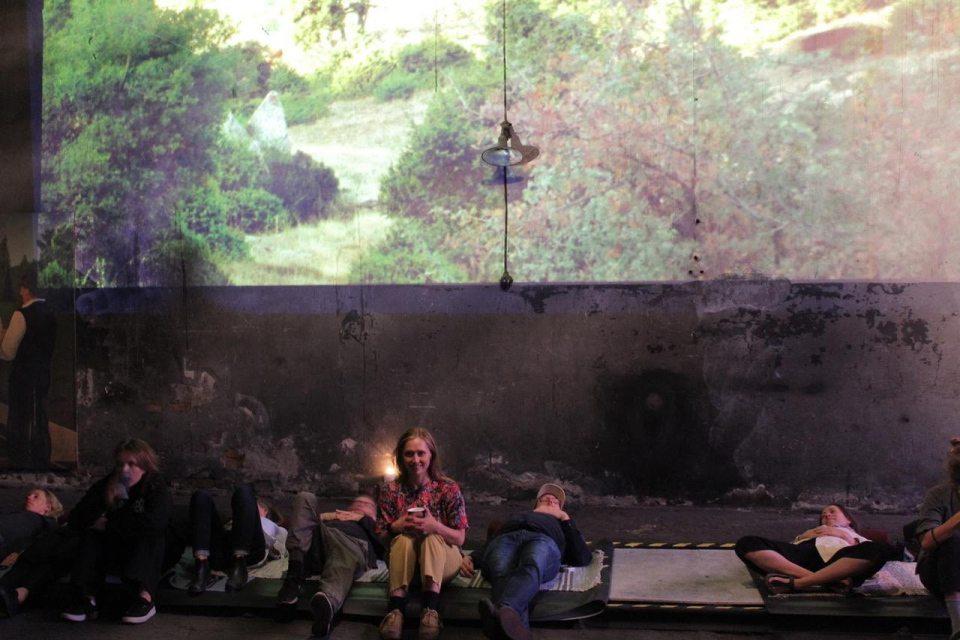 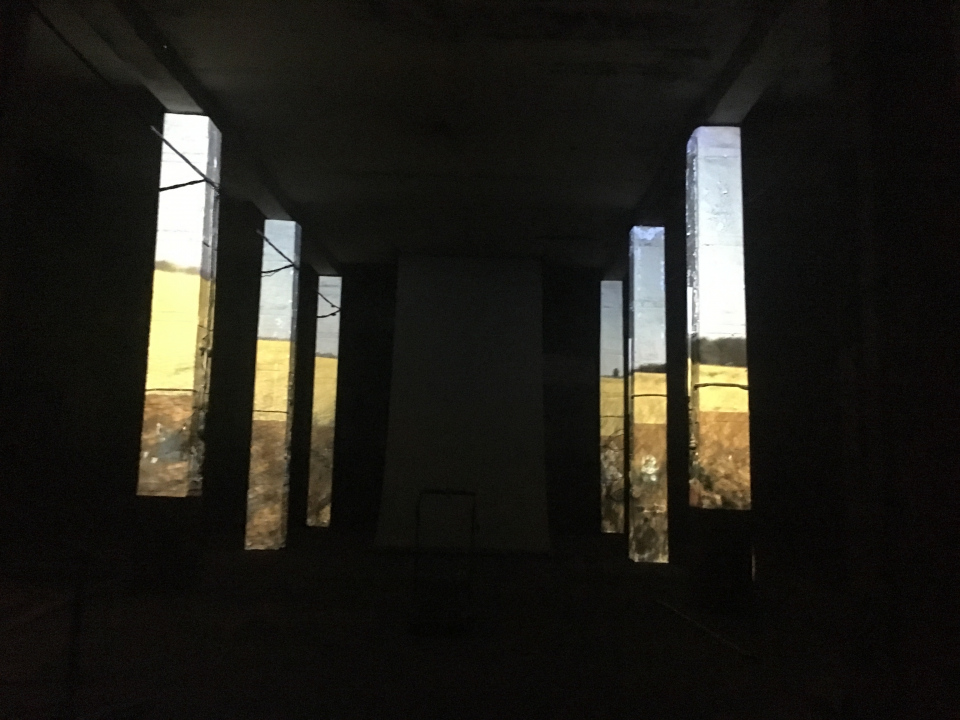 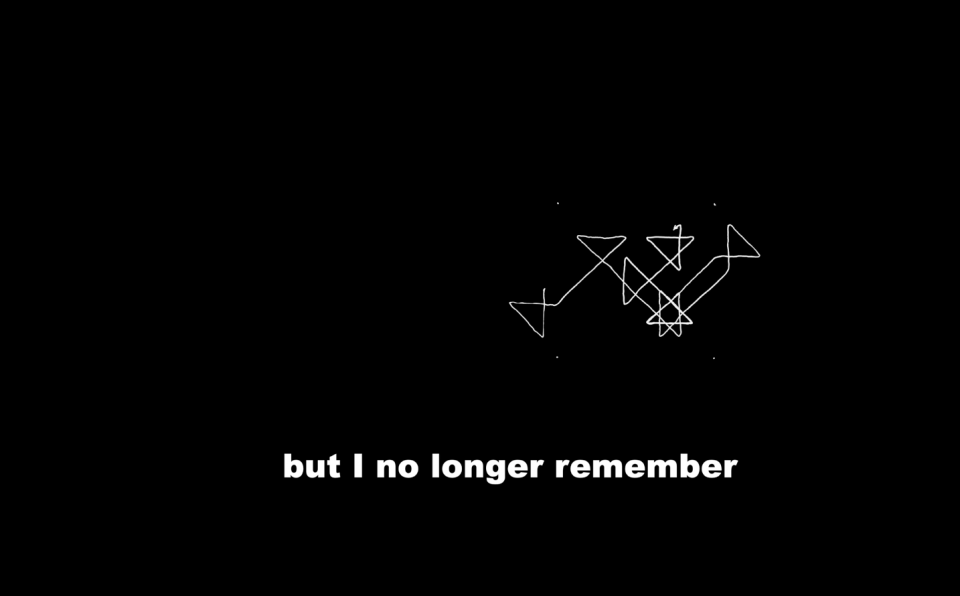 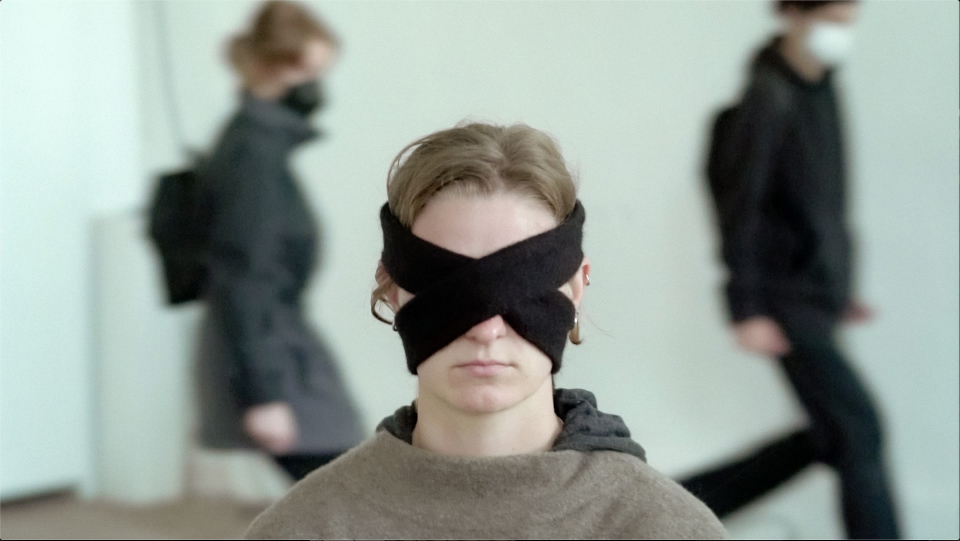